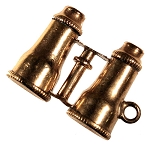 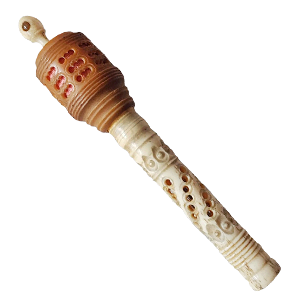 Stanhope Needle Case & Sewing Tape Combination Tool
This late 19th century Stanhope Needle Case & Sewing Tape Combination Tool is made of turned bone and coquilla nut. Most of these type Sewing Implements with stanhopes have views of towns and tourist areas and places of religious pilgrimage like St. Anne de Beaupre. The lower bone portion is the needlecase and the tape measure acts as a cap. Stanhopes are quite common to find in antique sewing implements and accessories. 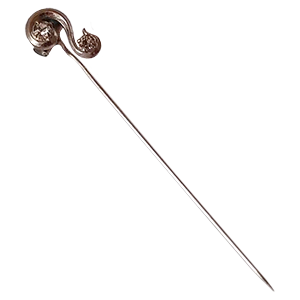 Victorian Art Nouveau Stickpin Design Stanhope
Most antique stickpins containing stanhopes were made prior to 1900.This stickpin was made about 1900's and is sterling silver with cut crystal stones. Victorian Era Stanhope Stickpins are interesting curiosities that were made in great variance. They are usually high in quality or manufacture and can be found with opal, pearls, garnet, ruby, emerald, ivory and shell to name examples. Many are figural carvings or castings that resemble objects like fists, barrels, globes, animals, etc. The stanhopes and the microphotographic subject matter they contain can be nearly anything. 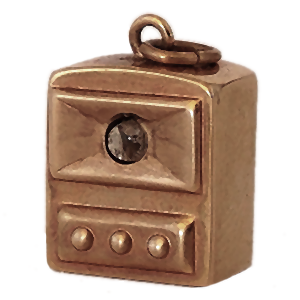 14k Gold 1939 NY World Expo Television Charm
This 14k gold figural TV set charm was introduced at the 1939 World Expo in New York. The stanhope peephole microphotograph shows three scenes of  NewYork including a split scene panoramic view of the New York City Skyline. Subsequently sold throughout the 1940's & 1950's, these stylish Stanhope TV Charms were available with images of different cities as a memento for tourists. They are also sometimes found to have actresses, risque pin-up girls and even professional baseball players like George Sisler. 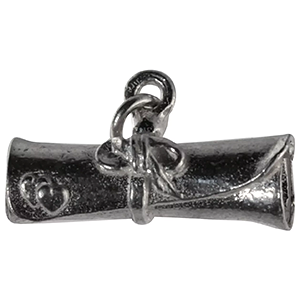 Bride & Groom Marriage Certificate Scroll Stanhope Charm
Made by Charland Designs this stanhope charm is in the form of a rolled marriage certificate. The stanhope pictures an illustration of a Bride & Groom in a Church. Other versions can be found with the "Wedding Vows" in the stanhope peep. The microphoto is marked "BRELOQUES" on the right side of the photo where you would typically expect to see "Made in France". As Stanhope Charms are concerned, this charm is one of the more recently made, produced about 1960-1970. They are fairly rare and hard to find these days due to low production. 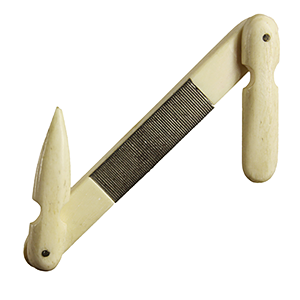 Antique Bone Manicure Tool Stanhope Souvenir
Bone Stanhope Manicure Tools exist in a number of different styles and forms. Pictured is one of the more unusual or atypical types. It has dual bone implements and a metal nail file. The bone tools are purposed for cuticle pushing, cleaning and shaping. The tools are affixed with brass pins and swivel out for use or to expose the nail file. Most Stanhope Manicure Sets were sold as souvenirs and mostly have stanhopes views of interesting tourist places. This stanhope of Ostende, Belgium shows a microphoto image of the Hotel Regina. 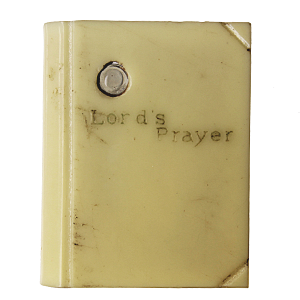 Bakelite Miniature Bible Lord's Prayer Stanhope
Early Miniature Dollhouse Bible Book is made of ivory colored Bakelite and pages fashioned from cork. "Lords Prayer" is embossed or impressed in the front cover and gilted with gold paint. A stanhope lens in the front cover of the book shows the Lord's Prayer. It is one of the few true dollhouse stanhopes ever to be made. Other Variations include a red version with Christmas Carols in the stanhope lens and the like embossed on the cover. 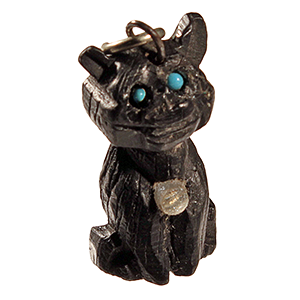 Bog Oak Stanhope Cat Charm
This Victorian Era Stanhope Cat Charm is an example of carved bog oak jewelry. It dawns inset turquoise colored eyes made of glass or stone. The stanhope viewer is located through the middle of the cats body and contains six scenes showing landmarks around the town of Sheerness in north Kent, England. As is the case with the majority of Bog Oak Stanhopes, this example is a late 19th century "McKee Dublin" production. 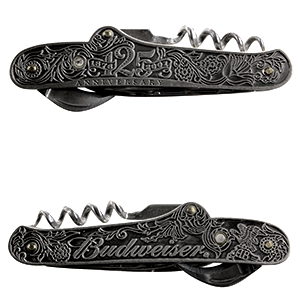 125th Anniversary Anheuser-Busch Pocketknife Stanhope
This Budweiser Champagne Pattern Corkscrew Pocketknife is a commemorative piece made in 2001 to celebrate 125 years of  since the founding of the Anheuser-Busch Company by Adolphus Busch. They made several models in 2001 and all can be considered "inferior" in quality when compared to earlier production knives made between 1870-1953. The plastic magnifier is not a stanhope and the photo quality parallels that of the knife itself. Whereas these knifes were cheaply produced in China, their well made predecessors were manufactured mostly in Solingen Germany and sometimes in Sheffield England. 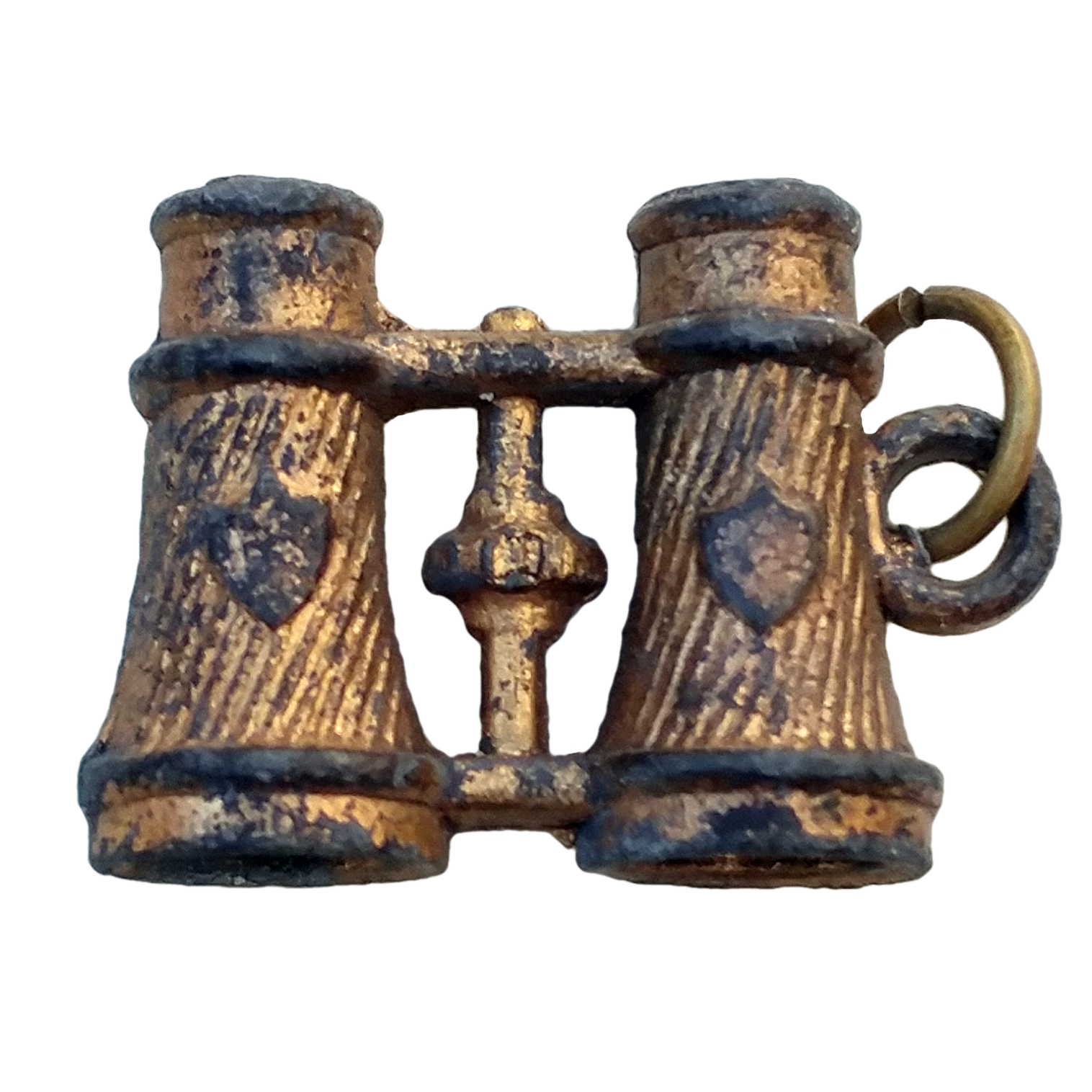 Antique c.1890 French Stanhope Binoculars Charm Peep
This late 19th century base metal, sometimes called pot-metal, charm is finished in a heavy gold gilt or wash and in the form of binoculars or Opera glasses. They are not highly detailed but the binocular barrels are finely grooved and each is adorned with a French "shield motif" as would be similar to a "coat of arms". Binocular charms with stanhopes were produced in many styles and from many different materials. 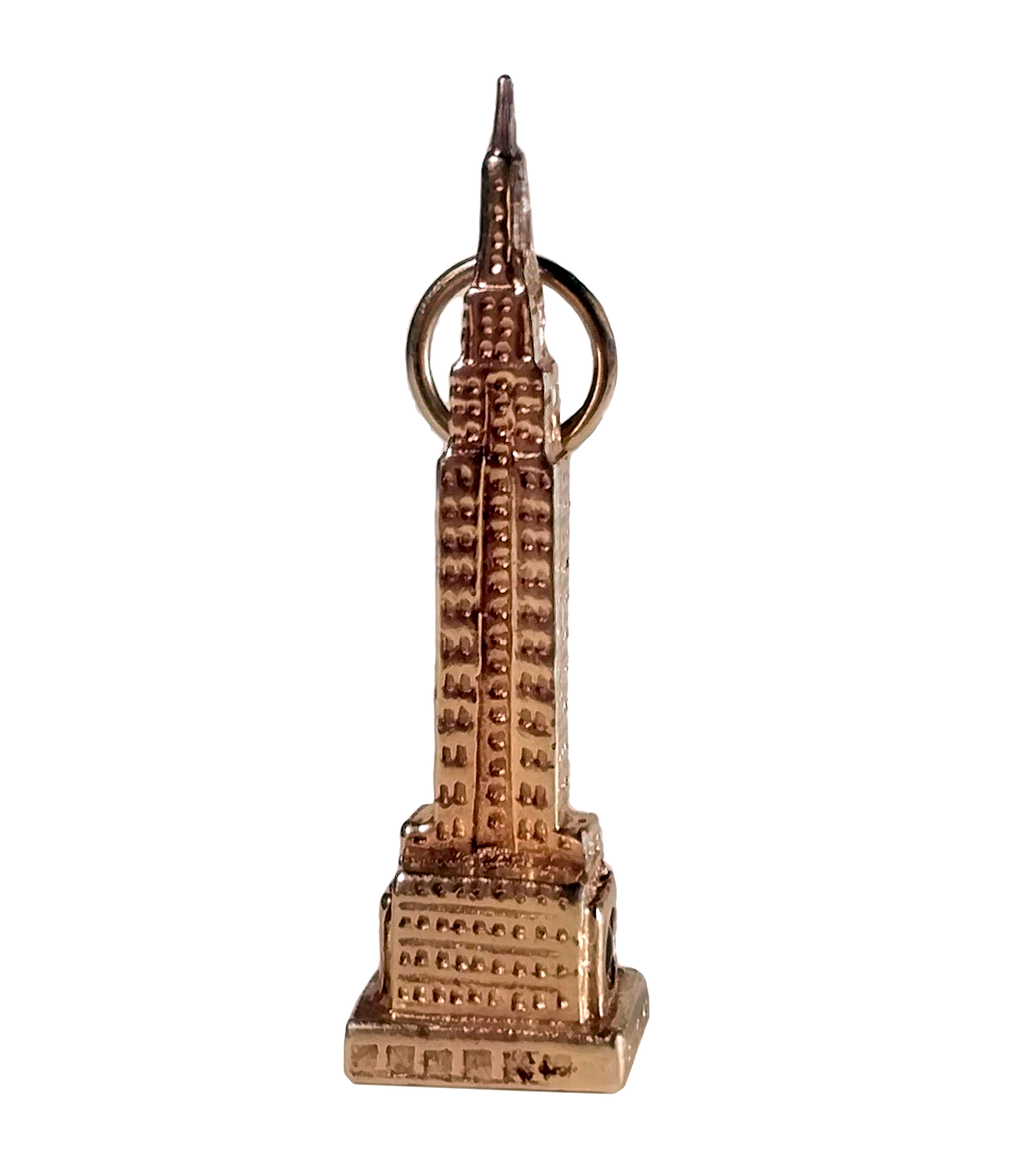 14K Gold Empire State Building Stanhope Charm
This Vintage Empire State Building NewYork Charm made in 14k yellow gold is just one of several gold stanhope charms made by Aetna Creations. Aetna Creations popular building charms can also be found in the form of Washington DC landmarks including the US Capitol, White House, Jefferson Memorial, Lincoln Memorial, Washington Monument and others. Such charms were available in both gold and Sterling Silver and naturally the silver versions are more abundant than their 14k gold counterparts. The stanhope is housed in the base of the building just above the foundation.The images contained within can vary in theme from a single image of the "Statue of Liberty" to multi-view microphotos showing iconic buildings, areas and landmarks including "Views of the Hudson River" and others. 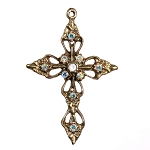 Aurora Borealis Iridescent Crystal Stanhope Cross
1960's Vintage Goldtone Stanhope Cross shows a nice clear view of the Lord's Prayer. Crosses like this one were commonly available in many different styles throughout the mid 20th century. Most have clear crystals that look like cut gems resembling diamonds, but this example boasts flashy iridescent Aurora Borealis rhinestones. Ruby, Emerald, Aquamarine and Turquoise crystals are less common but examples can be found. Sometimes called "Lord's Prayer Crosses", "Prayer Cross" or "Stanhope Cross", they are usually set in silvertone and are not so often in a goldtone setting. 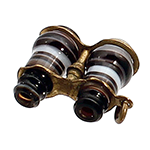 Banded Agate Binocular Charm with Irish Blarney Castle Stanhope
Victorian Era binocular charm is crafted from English banded agate. As it resembles "art-glass", the agate is striated with earthy hues of browns, black, gray and white. Made circa 1870-80 the metal fittings are comprised of gold plated brass. Turned stone binoculars, like this agate example, are fairly uncommon. Other Agate Stanhopes can include carved pendants found most often in the shape of a heart, oval or a figural book or animal, wax seals and stamps, and more.
9ct Gold Hallmark Stanhope Camera Charm Opens & Moves
Vintage & Rare 9ct Yellow Gold  Camera Charm London Stanhope Souvenir both opens and moves and is a London souvenir made in 1963. It's about 2cm wide & 1.7cm tall when closed. It is hinged like a locket to allow opening of the embossed camera back. Opening the back of the camera reveals a tiny roll of developed photos which can be seen and viewed through the glass bezel window when closed. Turning either of the knurled wheels on the bottom of the camera will move the film roll in either direction revealing more photos. The camera view finder is home to the stanhope lens featuring 5 views of London. 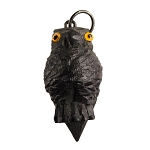 Victorian Bog Oak Owl Stanhope Charm Fob
This carved owl charm fob is fashioned or 3000 year old bog oak. Bog oak trinkets and jewelry stanhopes can be found in many different forms. Cauldrons, Crosses, Celtic Harps, Pigs, Cats and other animals are just a few of the bog oak stanhopes one may encounter. Most have views of  towns as the majority of such stanhopes were sold as tourist souvenirs. Many of these were made for the firm "McKee" in Dublin Ireland about 1880-1900. Often they are marked "McKee Dublin" on the stanhope view. Here you can our entire collection of Antique Bog Oak Stanhopes 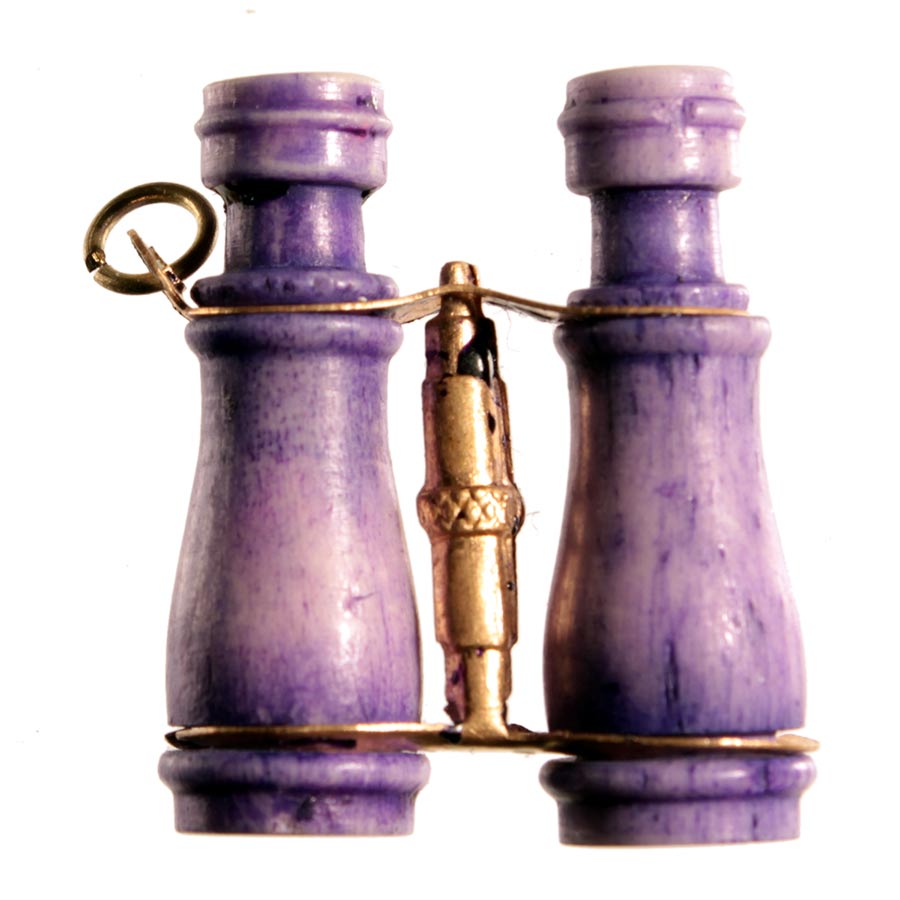 Dyed Bone Binocular Stanhope Charm Pendant
Unusual Victorian Era antique purple violet stained bone binocular charm pendant with and gold plated brass fixtures features dual erotic pornographic stanhopes. One of the images show two voluptuous Rubenesque nude women posed in front of a large rock with a white bird. The other stanhope depicts two nude women one of which is standing in front of a tree and the other sitting in the fork of an upper branch. Stanhope Binoculars can be found in many different shapes, colors, materials and styles. The stanhope microphoto pictures can show nearly anything though risque, religious or tourist places are most common. 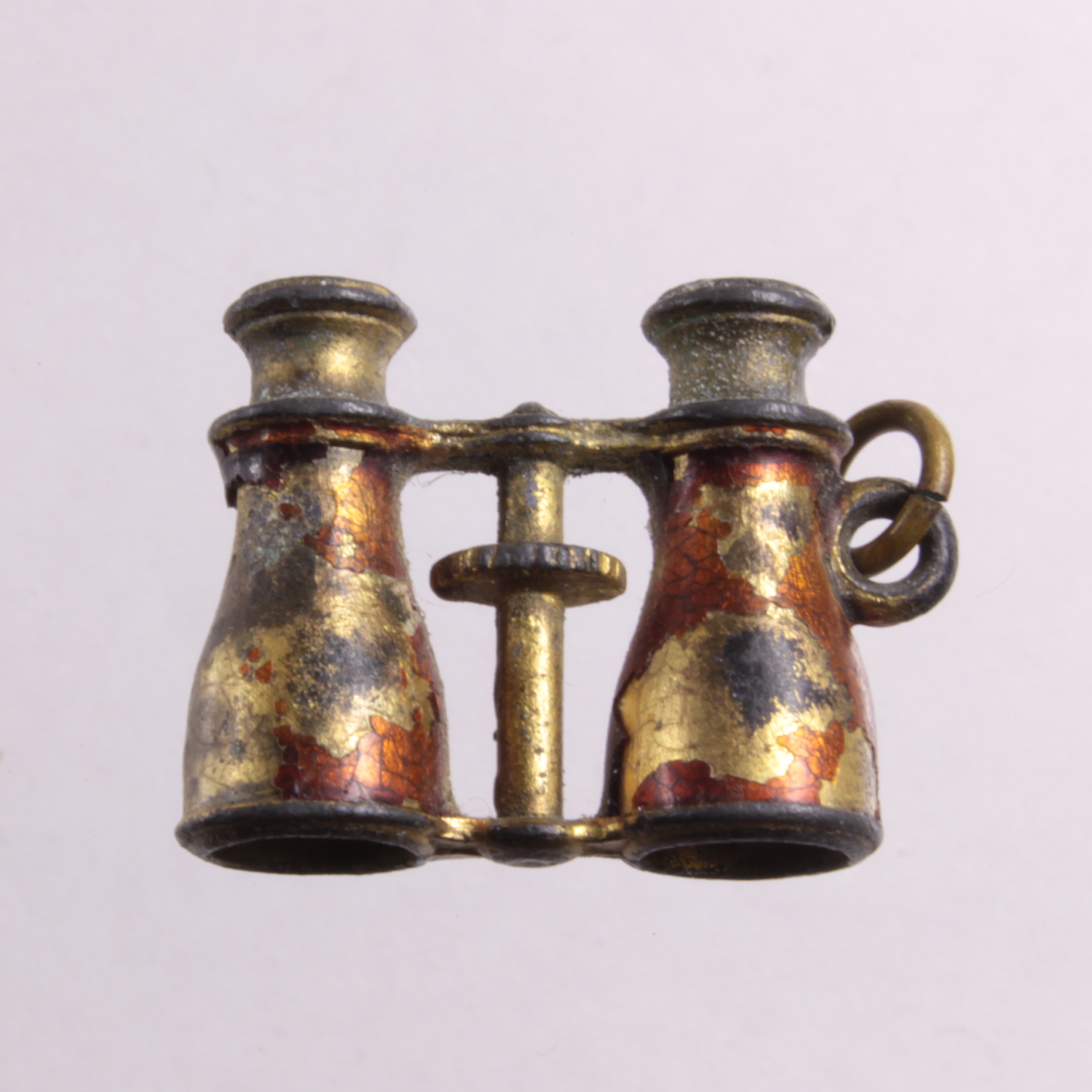 Gold Ormolu and Cloisonne Stanhope Binocular Charm Fob
This red cloisonne glass enamel over gold ormolu binocular charm made in France circa 1875-1885. Binoculars like these are very hard to find with any enamel in tact, however this one has retained a fair amount. The microphoto images depict early pornographic views of two separate Victorian era women. These binoculars measure 18mm tall x 24mm wide x 8mm thick and weigh 7.2 grams.

Do you like to write about stanhopes? We invite you to submit your articles to post on our blog. Articles should  be stanhope related. Write about your antique collection, your newly acquired treasure, a rare or common stanhope. We'd love to hear everything and so would many others out there. Send all articles to [email protected]. Blog articles are usually approved and posted within a few days.
TOP