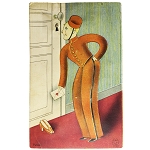 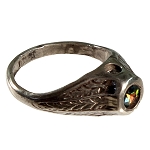 Quality Restoration Adds Beauty & Value!
The ANHEUSER-BUSCH Knives
These knifes exist in over 60-70 varieties and were given out by Anheuser Busch founder Adolphus Busch. they date from the 1870's were used as calling cards and incentive rewards. Adolphus was a pioneer in all respects. He was the first to pasteurize beer, invented the refrigerated rail car and developed a national market. He traveled extensively and lived several month a year in Germany were he was treated like a royalty. He was known for his extravagant gift giving and his knives represent one such example. Their handles vary from various metals to multi colored enamels as well as ivory and Mother of Pearl. There was a wide variety of patterns the most common being a champagne pattern. Most had Stanhopes of Adolphus in several different poses at several different periods of his life. At least 2 knives had tandem Stanhopes; the nickel silver version showing a picture of the factory and boasting the highest award at the Colombian exhibition of 1893. As a well-known business man in St. Louis at the turn of the 20th century, his knives apparently sparked a Stanhope advertising craze. They were sold at the 1904 St. Louis Worlds Fair. Cyrus Blanke a friend and acquaintance used his own version to promote his tea & coffee company. Others include Myerson's American Family Magazine, Russell E. Gardner of Banner Buggies and Carl Conrad, a beer and wine producer.
Knife World Magazine - Stanhopeless No More© Stanhope MicroWorks is proud to receive national recognition in the December 2001 issue of Knife World Magazine. Read the cover story "Stanhopeless No More" by Howard Melnick to learn more about how Stanhope MicroWorks is breathing new fire into both antique & contemporary pocketknives.
TOP