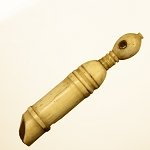 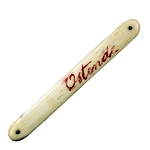 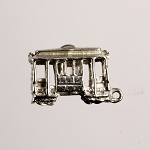 "Stanhopes: Playing peekaboo with the past"

Stanhopes: Playing peekaboo with the past

Howard Melnick, a Pennsylvania ear, nose and throat surgeon, had been a knife collector for years when he stumbled onto his first stanhope.

He was at a knife show when a dealer said he had something Melnick might be interested in seeing, an Anheuser-Busch knife with "little photos" in it. He put the knife's peephole to his eye and was astounded at the view, a tiny portrait of Adolphus Busch. A second peep showed a factory building.

"I thought it was absolutely the neatest thing I have ever seen."

Like many stanhope collectors, Melnick was hooked on his first encounter.

Stanhopes first were produced in the mid-19th century, shortly after the invention of photography. A clever gentleman named John Benjamin Dancer made the first microphotographs and placed them on glass slides to be viewed under a microscope. Dancer showed his novelty creations to David Brewster, inventor of the kaleidoscope, who was impressed. Brewster in turn would show microphotographs to a French photographer named Rene Dagron, who took the idea and ran with it.

Dagron attached tiny images (the size of the head of a pin) to the flat side of a magnifying lens, then inserted the lens into holes drilled into souvenirs, dip pens and jewelry. Though the lens really was a Coddington magnifier, says Melnick, Dagron called it a stanhope, named for a similar lens created by the third earl of Stanhope a century before. In any case, the name stuck and the idea was a hit, enthralling the French and spreading across Europe and then the United States.

Then as now, stanhope appeal isn't necessarily in the object or the image within, but the surprise. The tiny viewer turned trinkets into treasures with little secrets that are revealed only to those who know to look. At a cursory glance, the lens can appear to be a decorative element, a cabochon jewel or glass rivet; many people don't recognize a stanhope when they see one.

Stanhopes were made in every guise; most common today are crosses, many with tiny views of the Lord's Prayer, saints and cathedrals. Featuring a peek at Niagara Falls, petite souvenir barrels were produced as fob charms by the thousands, in feldspar and satin spar. Brooches, charms, rings, letter openers, pocketknives and tools, needle cases and tape measures all housed stanhopes.

Images run the gamut, too, from religious views to landmarks to "actresses," a period term for loose "wimmen." Floozies, some semidressed, some outright naked, were popular subject matter. The ladies still are desirable today and among the most popular stanhope images. Most stanhopes have just one image within but some have multiple views, six or eight or more.

France, and later Czechoslovakia, produced most of the stanhopes on the market today. Some are signed; many are not. It can be difficult to date stanhopes without experience; bone and ivory items tend to be early, but not necessarily. Some objects, such as crosses and rosaries, were made for decades. It can help if the view features a structure, say the Empire State Building or Golden Gate Bridge, that can offer clues to the date.

To some collectors, the date doesn't matter much. Nor does the image, which is why some are happy to buy what Melnick terms "stanhopeless," meaning without its lens and image.

Stephen Leonard, a New York collector and eBay dealer who sells under the name of 8TS, says he buys stanhopes with or without the images because stanhopes in general are getting harder to find. Leonard bought and sold stanhopes for more than 45 years and says he still sees new forms from time to time.

Stanhopes were made up into the 1970s, though peak years seem to have been roughly 1870-1920. One business, Stanhope Microworks, continues to produce stanhopes using a combination of old and new techniques. The company's Web site, www.stanhopemicroworks.com, offers customized modern stanhopes as well as a large selection of antique ones.

Concerned that Stanhope Microworks' production would flood the market with reproductions collectors couldn't discern, Melnick approached owner Michael Sheibley to discuss the potential problem. Sheibley responded by agreeing to sign his pieces to identify new from old, and the two men became friends. Now Melnick is working with Sheibley to create an online stanhope museum at the company's Web site.

Information on stanhopes always has been difficult to come by, says Melnick, who is considering writing a book one day. Meanwhile, English collector Jean Scott has beat him to it. Her Stanhopes: A Closer View (Greenlight Publishing, $43) has just been published. It is a 148-page softcover book with almost 300 color photographs and the kind of information collectors have clamored for. Not available yet in the United States, the book can be ordered directly from Scott's Web site, www.stanhopes.info.

Scott also is co-founder, with Douglas Jull, of the Stanhope Collectors Club, which accepts international members and publishes a biannual magazine, the Peeper. (See the Web site for details.)

It's rare to find more than one or two stanhopes in antique shops, if any at all. Some dealers have never seen one (or didn't recognize it if they did), and some have never heard of stanhopes. Kaydee Cooper, whose booth at Antiques at Rummel Creek in west Houston features a small collection of stanhopes (some of which are featured here), says she's always on the lookout for stanhopes. The treasures have become harder to find lately, perhaps because dealers who do have stanhopes put the items on eBay.

Common stanhopes such as crosses and barrels often go for $25-$50, items such as dip pens and letter openers for under $100. Because of the cross-collectibility -- many stanhopes were put into sewing notions, a collectible area in itself -- values for items such as needle cases and pocketknives can go considerably higher.

Melnick says he paid $45 for his first stanhope, the Anheuser Busch knife, which he later learned was one of at least 60 variations from the beer company (the knives now sell for hundreds of dollars). The first knives were created as novelties for company founder Adolphus Busch to give away, as early as the 1870s, on his travels. Later the company produced the knives on a larger scale as promotional items.

Condition of stanhope items affects value "quite a bit," Melnick says, though the rarity of the object is most important, followed by the content, then the quality of the image and the imprint, if there is one. Most stanhopes have little intrinsic value since the items were created as novelties.

Melnick says he was delighted by his first stanhope, and was pleasantly surprised later to find that the lenses had been inserted into thousands of other items. "I knew so little," he says with a laugh, "I assumed it was a knife thing. I didn't know there was all this other stuff, too. I started buying it all."