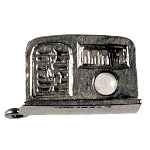 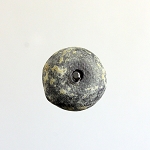 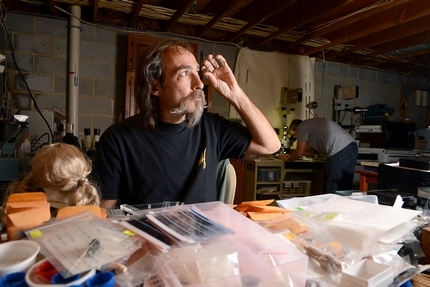 Stories about discovering a Stanhope picture lens usually start something like this: “My grandmother had a whale pendant with a Stanhope in it” or “I was shopping at a flea market and came across this neat pen with a peephole photo of the Eiffel Tower in it.”

Jewelry maker Jillian Aldrich and New York City artist Derrick Cruz tell these stories of the Stanhope, a small glass lens through which a microscopic photograph can be viewed. Both are now using the lens to add a personal touch to their custom creations.

“It’s special, like a magical keepsake,” said Aldrich, who lives on Long Island, N.Y.
But many people today don’t know what a Stanhope is, let alone where to buy one.

Sheibley, an accomplished violin maker, has been collecting and making Stanhopes for about 20 years. He owns Mechanicsburg-based Stanhope Microworks and Stanhope Jewelry Co.

“We have the respect of most of the world, but nobody (locally) knows us,” Sheibley said of his home-based operation, which sells products entirely online, with more than half of its annual sales overseas. “Who would think from a basement in Mechanicsburg that this is going on?”

“You never know where you are going to get an order from,” Sheibley said. 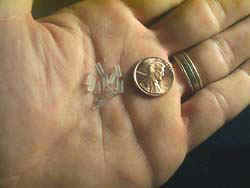 Michael Sheibley displays Stanhope lenses handcrafted at his Mechanicsburg workshop. Each lens, which contains a microscopic photo, magnifies the image more than 160 times for clear viewing.

International sales are exciting, but also a challenge.

Small companies that sell products outside of the U.S. often overlook export laws and regulations that apply to international shipments, said Tina Weyant, executive director of the World Trade Center Harrisburg. Companies also have to know how to price products for export, as well as handle payments and product returns.

“I would encourage everyone to be open to global opportunities, but at the same time manage the risk,” she said.

For Sheibley, doing business globally has been a learning process because shipping is very much a “necessary evil.”

“One of the biggest challenges is customs papers and just knowing what the laws are for each country,” he said. “When we ship something, we often are surprised.”

For example, depictions of people in various states of undress — a frequent Stanhope request — may be illegal in certain countries.

When Sheibley ships his products overseas, he categorizes them as an optical novelty or fine jewelry to minimize delays in processing. He also uses only priority mail to expedite shipments.

“Customers in Australia and the U.K. are aware their shipping rates are high,” he said.

In addition to a microphoto processing area in the basement, this self-described “mad scientist” also has a large workshop on his main floor where he repairs and builds violins, assembles Stanhope products and tinkers with other projects, including a coin-sized spy camera built from parts you can barely see without a magnifying glass.

But jewelry, including the popular Lord’s Prayer Stanhope in a cross, represents a large piece of Sheibley’s business. He’s become the go-to guy for the Stanhope.

Because his specialty is so rare today, Sheibley has found growing interest from other artists, including Aldrich and Cruz, who make custom products for clients all over the world. Cruz’s focus is luxury commission projects and limited edition pieces.

“He owns the market,” said Cruz, who has known Sheibley for about 10 years.

Midstate photographer Stuart Leask of Sturazzi Photography, who’s served as a mentor, said what Sheibley is doing is a “lost art.”

“He’s putting a picture on a bead of glass that you can hardly see. No one does that,” he said. “No one can copy it. It’s like copying a Faberge egg.”

For his part, the 52-year-old Sheibley said he’s “just having fun” and reviving a novelty product that more and more people seem to enjoy. He’s seen steady interest in his products and said he’s content staying small with one assistant.

“We’ve never gone out to sell or search for customers. They just find us,” he said. “And one (customer) turns into two more the next year.”

He recently connected with the owners of Cumberland County-based Brain Vessel LLC, a creative services firm that runs an art gallery and design studio. That relationship could extend the Stanhope’s reach into local handmade products, which could turn this global novelty into a bigger business — even if Sheibley is ambivalent.

“We’re mom and pop. We like being mom and pop,” he said. “I fight with the transition of getting bigger. I’m just riding the wave.”

Do you like to write about stanhopes? We invite you to submit your articles to post on our blog. Articles should  be stanhope related. Write about your antique collection, your newly acquired treasure, a rare or common stanhope. We'd love to hear everything and so would many others out there. Send all articles to [email protected]. Blog articles are usually approved and posted within a few days.
TOP